The Jay and Kevin Show ( Part 1 ) by Spokane Grapevine

I have been with the Jay and Kevin show for the better part of 15 years. This is a prequel of the series of posts I will be posting about these two fantastic men in the Spokane radio market. I only say that because I know they will be reading this (well Jay might) and I don’t want them to hit me on Friday. Awwww…..Just joking. They really are two of the coolest kids on the block and there is so much about them I feel the Spokane market needs to know. Hence the four (or maybe five) part series of postings about what Jay and Kevin are all about. 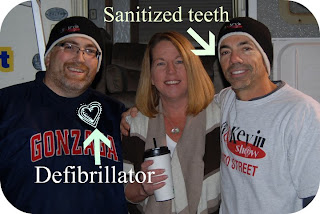 Many people (too many to count) ask me, “How did you get started with the Jay and Kevin show?” Would you believe that back in 1995 (yes that is 15 years ago) I was listening to their show one morning and they put out a challenge to their listeners. They wanted a Big-Mac. Now you may or may not know…..They don’t make Big-Mac’s until after 10:30 (or whatever time it was). Herin lies the problem…..see they were the morning show even back then. I did um one better I got them a couple for free to boot. This began an almost year long series of what was to be called “Free Food Friday”. 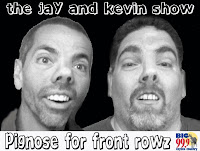 So there you go. That is how I began my almost weekly trek to whichever radio station they were working for at the time. I have been with them for the birth of all of their kids (and producers). I’ve helped Kevin change houses many times. (and only two for Jay). I’ve plowed snow for them, enjoyed countless contests with them, dressed in goofy costumes at their request, been on top of 120 foot tall cranes for them, killed microphones while they recorded it, we have laughed together and cried together (9/11/2001) …….Quite honestly the list is almost endless. If you do the math, I have been a part of, somewhere in the neighborhood, of 800 of their broadcasts. The series of posts I will do will depict some of the more fun stories of the times we have had, some of the crazy crap they have asked me to do and people I have met because of it……….