The Jay and Kevin Experience 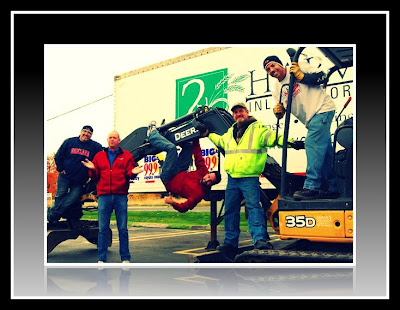 Ok, now that I have given you the run down on the meat and potatoes known as the Jay and Kevin show……Wait a minute which is the meat and which is the potatoes? I guess you will have to decide for yourselves. Let me just tell you briefly some of the crazy crap they have had me do over the last 15 years. This will possibly give you insight into what it was like to be a pinball for the “Morning Crew”. When I say pinball I do it with loose lips because that implies being forced to bounce around. Most of the time I did it willingly…..I did say most of the time right? I wish I had pictures to show you of these past events, but back then a digital camera was a seriously expensive piece of hardware and I did mention that this was radio right? So Let’s dive right in.

The first thing that comes to mind (and was the most embarrassing for me) was sitting in a bathroom stall at the airport on the boarding platform (pre 9/11). I was wired up to a cell phone with an earpiece/microphone (they call those blue tooth now). I would engage in conversation with the man in the stall next to me, asking for toilet paper, how cold was the water etc. I was being fed what to say, by Jay, thru the ear piece and all the responses were put right back over the air…..Freakin’ hilarious……I could hardly contain my laughter…..The embarrassing part came when I had to step out of the stall………

Another memory that just can’t go without mention is the infamous “Aqua-Man” series….This went on for several months. See….they would dress me up in a dry suit, snorkel gear and flippers and I would go to different locations around town in search of grape jelly for my submarine. Of particular note was the time I approached four uniformed police officers in a sit down restaurant and proceeded to get a handful of grape jelly…..I had a hard time figuring out how to run in a pair of flippers…..crap that was funny!

If you have been with the Jay and Kevin show for any length of time you will undoubtedly remember the “Indestructible Microphone” series. This was, again, another series of events where I would find different ways of killing a microphone while it was hooked up to a mic cord…..Here is a list of things we tried to kill the microphone with.

Another notable event was just a one time deal. Jay and Kevin dressed me up as a “construction worker” and I set up cones. I would flag people down and tell them I needed to drive their vehicle thru the “construction” zone. While I was driving their car I would change the station to The Jay and Kevin Show, where they proceeded to address the driver. I think I almost peed my pants laughing so hard on this charade.

Who could forget the years of the “Pumpkin Drop”….not me, that is for sure.  Each Halloween for about 5 years we would hike a 500+ pound pumpkin to the top of a 120 foot crane where I would release the gourd (from an adjacent crane) to plummet to it’s demise onto a vehicle, boat, RV or just a plain target. I have to admit, this was one of the funnest things I got to take part of in my 15 years with the show.

These are just a couple of the many, many stories I have, but I hope this gave you all a laugh as it has for me these past 15 years…..

Once again I apologize for the lack of pictures but after all this is radio and sometimes you just need to turn on the “Theater of the mind”.